Commit your way to the Lord, trust also in Him,And He shall bring it to pass. (Psalm 37:5)

Trust, or faith is total dependency upon a person or thing. In the Old Testament, total trust as placed in a Savior to come, by faith (Hebrews 11). While Jesus was on this earth, people placed their total trust in Him to heal, fix, and even raise the dead!


They said to Him, “Lord, come and see.”Jesus wept.  Then the Jews said, “See how He loved him!” And some of them said, “Could not this Man, who opened the eyes of the blind, also have kept this man from dying?” Then Jesus, again groaning in Himself, came to the tomb. It was a cave, and a stone lay against it.  Jesus said, “Take away the stone.” Martha, the sister of him who was dead, said to Him, “Lord, by this time there is a stench, for he has been dead four days.” Jesus said to her, “Did I not say to you that if you would believe you would see the glory of God?” (John 11:34-40) 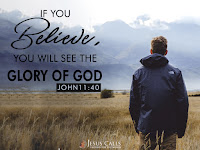 We are instructed by John to believe in the Savior Who is to come! He wrote about Jesus and His miracles for just that reason . . . that we may  believe and live!


And truly Jesus did many other signs in the presence of His disciples, which are not written in this book;  but these are written that you may believe that Jesus is the Christ, the Son of God, and that believing you may have life in His name. (John 20:30-31) 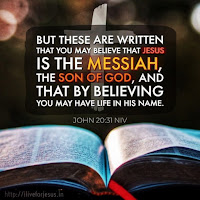 Will you take Him at His word or must He raise the dead? He will you know!


For the Lord Himself will descend from heaven with a shout, with the voice of an archangel, and with the trumpet of God. And the dead in Christ will rise first. Then we who are alive and remain shall be caught up together with them in the clouds to meet the Lord in the air. And thus we shall always be with the Lord.                    (1Thessalonians 4:16-17)

Email ThisBlogThis!Share to TwitterShare to FacebookShare to Pinterest
Labels: A Place Called HOPE, Believe!, Do you really know Him?, Live the Truth, Speak Wisely, Toys and Other Things