The Spirit Makes the Difference! 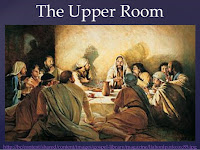 Then, the same day at evening, being the first day of the week, when the doors were shut where the disciples were assembled, for fear of the Jews, Jesus came and stood in the midst, and said to them, “Peace be with you.”  When He had said this, He showed them Hishands and His side. Then the disciples were glad when they saw the Lord. So Jesus said to them again, “Peace to you! As the Father has sent Me, I also send you.”And when He had said this, He breathed on them, and said to them, “Receive the Holy Spirit. If you forgive the sins of any, they are forgiven them; if you retain the sins of any, they are retained.”(John 20:19-23)


The Spirit Makes the Difference! Before receiving the Holy Spirit, the disciples were hiding in fear! Fear for their lives, fear for the future, fear of humiliation. Yet once Jesus gave them the gift of the Spirit within them, they were unstoppable!

James, Zebedee's son was beheaded. Phillip was scoured and crucified in Phrygia. IMatthew killed in Ethiopia. James (brother of Jesus) was stoned and clubbed. Matthias stoned and beheaded in Jerusalem, Andrew, Peter and Bartholomew beaten and crucified! Need more . . . .?

Now we, who have this same Spirit, remain quiet? We have the head knowledge. Let's show it and live a relational experience with this Living Savior!
at April 24, 2019

Email ThisBlogThis!Share to TwitterShare to FacebookShare to Pinterest
Labels: A Good Team Mate, Do you really know Him?, Good Suffering?, I got questions!, In His Image, Passion WEAK, Speak Wisely, Time Management, Tradition, Why am I here?